The region’s first ever Congestion Management Process (CMP) Plan was approved by the Roanoke Valley Area Metropolitan Planning Organization (RVAMPO) on January 23, 2014.  The CMP Plan is a new federal requirement for the RVAMPO, due to the fact that we became a Transportation Management Area (TMA) status MPO.  This new TMA status is a result going over 200,000 in population within the urbanized area according to US Census Bureau definitions.

The Regional Commission and its staff viewed this new requirement as an opportunity to get ahead of future traffic congestion and to discuss multi-modal strategies to address current and future congestion.  We feel that we broke new ground with our first ever CMP, compared to examples from similar sized regions that were already TMA status MPOs.  Our first CMP is truly multi-modal in nature and incorporates strategies directly from local comprehensive plans, regional corridor, greenway and bicycle plans so that the strategies and suggestions from these plans can live on in our region’s first CMP.  In addition, we developed a new way of internal collaborative document development where more than one staff member can work on a plan simultaneously.  This allowed us to be both efficient and effective within our limited time and budget constraints.  We feel that we developed a much better plan than would have been the case if we would have approached the process in a traditional manner.

This blog post was originally published on February 22, 2013 on the RIDE Solutions blog: http://ridesolutions.org/passenger-rail-the-long-distance-commuter-and-megaregions/ The original post along with a sample selection of some of the 27 comments follows. 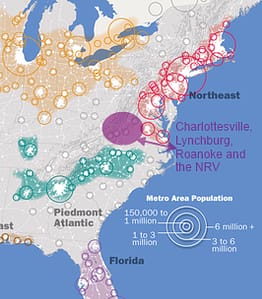 Megaregions are commonly defined as a large network of metropolitan regions that are tied together economically in such a way that they are becoming the new competitive units in the global economy.  The Regional Plan Association, a non-profit organization, recognizes 11 megaregions in the United States.  In the map above, the area in the black circle, located between three megaregions, roughly corresponds to an area starting around Charlottesville in the north and approaching the Tennessee border in the south.  This area lies between the Northeast Megaregion (Washington to Boston Corridor), the Piedmont Atlantic Megaregion (Charlotte to Atlanta Corridor) and the Great Lakes Megaregion.  There is likely to be a strategic economic development opportunity to being so conveniently geographically positioned, provided that we can develop the appropriate economic connections from the megaregions to our area.

Completion of the Trans-Dominion Express (TDX) Passenger Rail service from its current terminus in Lynchburg to include Roanoke and extend to the Tennessee border, eventually connecting with any future passenger rail service in Tennessee itself, will provide one such opportunity.  The important point about passenger rail is that it would largely complement our current highway and airline connections to the megaregions, not substitute for them.  Passenger rail is useful for business people, who want to get work done, prepare a presentation/proposal or rest before a meeting while travelling.  With regard to economic development, passenger rail can be useful to several target markets:

·         The Retiree Entrepreneur/Consultant – educated and successful retirees who retire from their corporate careers before they turn 65, and who re-locate to lower cost of living regions who win “Best Places to Retire” mentions in magazines, like our region.

·         The Large Corporation Looking for a Satellite Office – large professional service firms who want to tap a talent pool who can easily travel to clients in multiple megaregions from one satellite location.

·         The Recent Graduate Entrepreneur – recent graduates from Virginia Tech, UVA, Radford University and a variety of other regional colleges and universities, who start technology businesses in our area and need to travel to see clients in multiple megaregions.

There is now renewed interest in getting passenger rail extended from Lynchburg to Roanoke and beyond.  The Honorable David Trinkle and the Honorable Ray Ferris, both members of Roanoke City Council, recently wrote an Op-Ed in the Roanoke times describing this renewed interest in passenger rail.  Passenger rail is much more than train enthusiasts and tourism; it has real potential to foster strategic economic linkages that takes advantage of our geographic position between multiple megaregions.  Passenger rail coupled with an enhanced broadband network could be the combination needed to allow highly experienced and educated entrepreneurs and consultants to live and work in our region while cultivating clients and business relationships in multiple megaregions.  This will be a 21st century version of a long-distance commuter.  These three recent blogs (blog 1, blog 2 and blog 3) have explored a similar economic development potential of alternative transportation.  We should encourage the extension of passenger rail for its economic development potential.

A sampling of comments to the original blog post:

The draft Summary of the Livable Roanoke Valley Plan is now available for public review and comment. The plan includes strategies to promote economic opportunity and quality of life in the Roanoke Metropolitan Statistical Area, including: Botetourt, Craig, Franklin and Roanoke Counties, as well as the Cities of Roanoke and Salem. Public comments will be accepted until February 5th, 2014.  An official public meeting will be held after the public comment period has elapsed to allow citizens to make verbal comments regarding the plan.  The plan can be downloaded here.