In 2013, tenants of the Roanoke Centre for Industry and Technology (RCIT) met with staff from the Roanoke Valley-Alleghany Regional Commission (RVARC), City of Roanoke Economic Development Department and Greater Roanoke Transit Company (Valley Metro) to discuss the potential of providing transit service into the industrial park.  Several large tenants of the RCIT had expressed to the City a growing need, by employees, for a transit stop closer than the existing one of 3/4 – 1 mile from their facilities.  Further, many company representatives indicated that prospective employees were discouraged from applying for jobs at the RCIT due to a lack of efficient bus service from their homes into the industrial park.  This concept of disparity between the location of low income households and appropriate employment opportunities is known as spatial mismatch.  Through a series of meetings to address this and other issues, a transit needs assessment survey was developed and administered to RCIT employees. 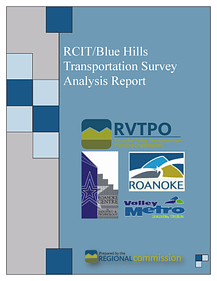 In March 2014, RVARC planners presented the RCIT/Blue Hills Transportation Survey Analysis Report to the RCIT tenants.  Overall, there were 528 respondents to the survey.  The overall response rate for the survey was 23.4%, based on the 2,255 employees in the RCIT.  The concerns raised by the tenants regarding the unwillingness of many prospective employees to apply for jobs in the park due to a lack of sufficient transit, were considered and reflected in the survey analysis.

In Question #11, 517 respondents replied to whether or not they would use Valley Metro or a specialized bus service that provided them with frequent and convenient service to businesses along Blue Hills Drive.  While 53% or 273 respondents said they would not consider using bus service, 47% or 244 indicated they would. It is important to note the willingness of employees to consider using a new or specialized service, nearly half, when currently 83% do not use bus service at all.

Since the release of the survey analysis, Valley Metro and RVARC staff continue to work with the RCIT tenants to improve transit service to employment destinations in the industrial park.  Such an improvement to the transit system would help eliminate the spatial mismatch, make jobs available to more people, and solve employment issues with RCIT businesses.