On January 22nd, the Roanoke Valley Transportation Planning Organization (RVTPO) Policy Board approved the designation of Multimodal Centers and Districts through a draft map.  This concept originates from the Virginia Department of Rail and Public Transportation’s Multimodal System Design Guidelines which encourages the planning and implementation of an integrated transportation system including automobiles, public transit, bicycles, and walking.  As recommended in the Guidelines, TPO staff have engaged local government staff to develop multimodal centers and districts, which can be generally described as follows: 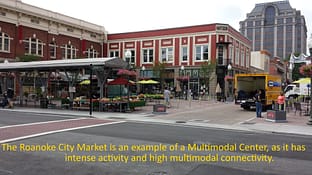 Multimodal District:  A portion of a city or region with land use characteristics that support multimodal travel, such as higher densities and mixed uses, and where it is relatively easy to make trips without needing a car as gauged by the number of bus routes available, and safe walking or biking paths – either currently or proposed in the future.

Multimodal Center:  Compared to a multimodal district, a multimodal center is a smaller area of even higher multimodal connectivity and more intense activity, roughly equivalent to a 10-minute walk or a one-mile area.

The combination of population and employment density per acre is described in the Multimodal Design Guidelines as activity density.  Activity density can be used to identify multimodal centers and distinguish between land use intensities (urban to rural).

The Roanoke region’s economy is greatly supported by the economic activity that occurs in multimodal centers and districts.  Strengthening these areas, and connecting them with good transportation options bolsters the economy, allows for growth and the use of land more wisely, and creates numerous opportunities to move people and goods more efficiently.