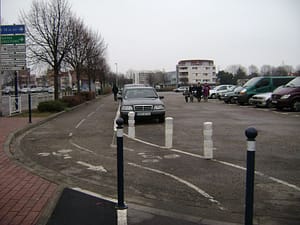 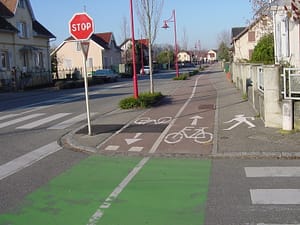 I have placed these two images from Europe in several social media channels, in order to stoke discussion about whether similar approaches could work here.  For the sake of discussion let’s defer on whether the differences between European and American engineering design, safety standards and/or laws-ordinances would allow these or similar designs in the Roanoke Valley.  Instead, let’s assume that developers could re-purpose a portion of a mall or grocery store parking lot to contain pedestrian paths and/or bike lanes; or that local governments could re-configure the concept of a sidewalk as a multi-user path.

We would like your feedback and discussion.  Please use the comment boxes below to add your ideas.

5 thoughts on “Can we re-think the sidewalk and the bike lane?”