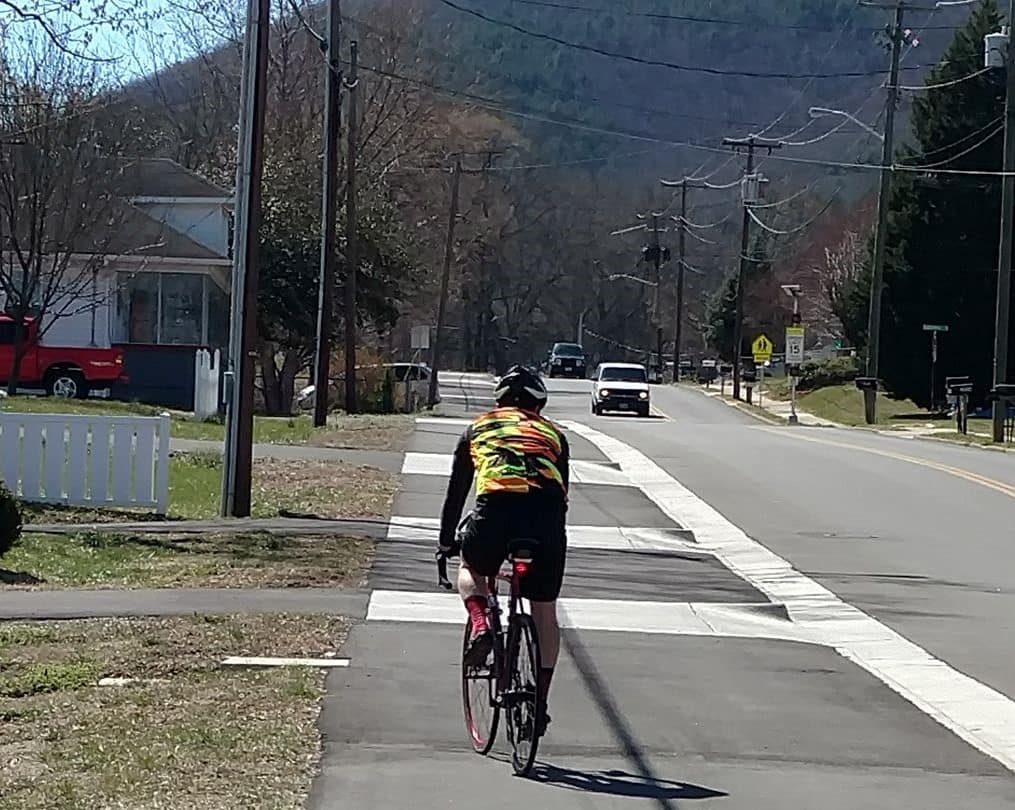 The first time I saw the Garden City Greenway I stopped and stared. It is one of the most unusual multiuse trails I’ve ever seen. The alternating white concrete and black asphalt brings to mind a chess board. I thought the contrast was to draw attention to the many driveways that cross the greenway. I invited Priscilla Cygielnik to chat about the unusual greenway she designed with the Pedestrian & Bicycle Advisory Committee.

The Garden City Greenway was initiated through a Safe Routes to School grant and completed with local and state revenue sharing funds. Therefore, its purpose is to provide a way for kids to walk and bike to school. Priscilla had many constraints when designing the trail. It was built as much as possible within the existing right-of-way of the Garden City Blvd. That makes it different from most greenways, which do not follow a road. Most greenways in Roanoke follow waterways: the Roanoke River Greenway, the Tinker Creek Greenway, and the Lick Run Greenway.

To keep it within the right-of-way of the road, it is mostly 8 feet wide, which is the minimum width for a two-way multiuse path. Bicyclists are more comfortable with 10 or 12 feet. For context, modern sidewalks are 5 feet, and most roads are at least 28 feet.

The narrowness and its location within the road’s right-of-way make it feel more like a glorified sidewalk than a bike path. But don’t take that as a criticism. Keep in mind the purpose of providing a way for kids to walk and bike to school. It serves that function very well. Other greenways have a more recreational purpose. The Garden City Greenway is not a great recreational greenway.

Even keeping it as much as possible within the road’s right-of-way, they still had to acquire some additional right-of-way. Acquiring right-of-way is the greatest expense and obstacle of most trails. In the original design, a portion of the greenway fronting one property would shrink to 5 feet because the landowner absolutely refused to sell or give up any land. However, during construction he approved of the improvements being made and agreed to sell the additional 3 feet necessary to make the improvement in front of his property.

Priscilla pointed out the driveway improvements have to do with the steep slopes downhill of the existing road.  To be able to navigate a vehicle in and out of a driveway, the entrances were specially designed to ensure proper drainage but reduce the pitch typical of standard entrances. Luckily, it was pouring rain as we walked, so we could see the drainage improvements in action.

Another landowner, this one a business, strongly opposed the project. He conceded the right-of-way needed but negotiated for having his parking lot repaved. But after the greenway was built, he called Priscilla. “I didn’t think this greenway was any good,” he told her, “but it turned out really nice.” He has new customers who walk and bike to his store.

The greatest weakness of this project, in my opinion, is the number of driveways that cross the greenway. I’ve heard more than one kid describe an experience someone backing out of their driveway hit the kid walking, biking, or roller skating down the sidewalk. Regardless of whose fault you think that is, we can reduce these incidents by reducing the potential conflicts. Priscilla said the contrasting concrete & asphalt that caught my eye was coincidence, but it is does draw attention to the driveways.

The location of the school on a busy road with lots of driveways was a decision made long ago when engineers, developers, and planners were only building for cars. Retrofitting our autocentric world to accommodate other types of travel is a long and expensive process. Many projects, like the Garden City Greenway, will just have to do the best they can, fixing the problems we can fix and living with the problems we can’t fix yet.