In August of 2016, the Regional Bicycle Advisory Committee met for the first time in a couple of years. Most of those who attended were locality staff, and they missed the citizens who had given such valuable input into the bike projects throughout the years. New staff struggled to understand the purpose and function of the committee and its history. In short, the committee experienced an existential crisis, asking why it existed, who it was, what it should do, and how it should do it. 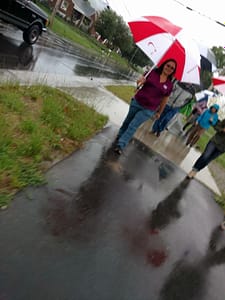 After several deep discussions, the group worked with the Transportation Technical Committee (TTC) to develop its purpose and procedures. Its named changed to the Regional Bicycle & Pedestrian Advisory Committee, reflecting the close relationship of bicycle and pedestrian issues.

The purpose of the Regional Bicycle & Pedestrian Advisory Committee is to facilitate regional collaboration with diverse stakeholders in planning bicycle and pedestrian infrastructure in the Roanoke Valley. It develops an Action Plan to guide its efforts each year and reports to the Transportation Technical Committee (TTC) of the Roanoke Valley Transportation Planning Organization. Members are roughly half locality staff and half citizens.

The TTC adopted the purpose and procedures of the new committee on January 11, 2018 and began accepting applications for the ten at-large positions. Astonishingly, the TTC received 25 applications! Applications included teachers, bike shops, accountants, and non-profit staff. They bike and walk for transportation, for fun and fitness, or by necessity. We had a diverse pool of applicants representing “protected populations” criteria such as mobility impairment, visual impairment, minority, and low-income. With so many well-qualified applicants, the decisions were difficult.

In April, the TTC appointed the initial ten at-large members to staggered two-year terms. The committee itself will make future appointments subject to TTC approval. The committee will meet on June 21, 2018, 4:00 – 6:00 pm at the Regional Commission, 313 Luck Ave SW, to learn about its roles and responsibilities and discuss its Action Plan. Meetings are open to the public. Learn more on the committee web page.