An initial analysis of data released today by the U.S. Census bureau showed continued population growth in the Roanoke Metropolitan Statistical Area (MSA), which includes the counties of Botetourt, Craig, Franklin, and Roanoke, and the cities of Roanoke and Salem. According to the 2020 census, population in the MSA grew 2.1% over the previous decade. Statewide, population increased by 7.9%, which represents a lower growth rate than the previous 2000-2010 Census.
“We’re pleased to see that the region continues to grow,” says Matt Miller, Director of Information Services for the Roanoke Valley-Alleghany Regional Commission, who performed the analysis. “And while the growth rate was lower than in previous years, this tracks with trends we are seeing nationally.”
The City of Roanoke, with a 3.1% growth rate, saw its population increase to over 100,000 for the first time since the 1980 Census. At 4.9%, Roanoke County saw the largest population growth of the jurisdictions covered by the Commission. Overall, the Roanoke Valley-Alleghany Regional Commission area – which stretches from Franklin County to Alleghany County – saw a growth of 1.6%.
“Overall, this data affirms trends we’ve seen the last few decades,” added Miller. “Small but consistent growth in our urban areas, and loss of population in our rural counties, cities, and towns.”
While more data is expected to be released by the Census, these population estimates will be used in the near term to help governments redraw local, congressional, and state legislative districts. 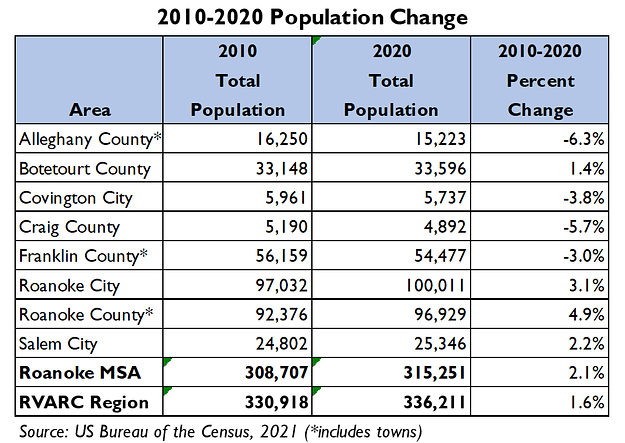