The Regional Bicycle and Pedestrian Committee is the result of decades of bicycle activity. Bicycle planning in the Roanoke Valley goes back more than 40 years. The Fifth Planning District Commission, now the Roanoke Valley-Alleghany Regional Commission, adopted the first Bikeway Plan in 1975, titled “Bicycle Once Again in Roanoke”, with updates in 1981, 1991, 1997, 2005, and 2012. Citizen’s Bicycle Advisory Committees guided development and updates, as well as the Regional Bicycle Suitability Study Phase II in 2004. A closely related effort, the Greenway Commission, established in 1995 and initially housed in the Fifth Planning District Commission, has had a profound influence on bicycling in the Roanoke Valley.

A site visit from the League of American Bicyclists in 2008 marked a turning point in on-road bicycle facilities in the Roanoke Valley. Acting on recommendations from the League’s site visit, the Regional Commission created the Regional Bicycle Advisory Committee. At the same time, the City of Roanoke formed a steering committee of staff from key departments and volunteers to apply for Bicycle Friendly Community status, and received the Bronze designation in 2010, 2012, and 2016. The concurrent Regional Bicycle Advisory Committee had representation from local governments, VDOT, Greenway Commission, RIDE Solutions, Roanoke Regional Partnership, Blue Ridge Bicycle Club, area bike shops, and citizen advocates. It served as a forum for discussion of bicycle-related topics and facilitated the provision and promotion of bicycle accommodations, information, and resources in the greater Roanoke area. Specifically, it informed the Roanoke Valley Area Metropolitan Planning Organization (now the Roanoke Valley Transportation Planning Organization) of relevant topics and information for discussion or action, assisted in updating and implementing the Regional Bikeway Plan, assisted in the National Bicycle & Pedestrian Documentation project, participated in periodic Planners and Engineers Rides, and assisted the annual Regional Bike Awards program, among other activities.

A few key people from the earliest days of Roanoke’s journey into bike/ped infrastructure deserve mention. Local attorney David Harrison engineered the visit from the League of American Bicyclists at the Higher Education Center, including garnering funds for the presentation. City of Roanoke Director of Traffic Engineering Mark Jamison, a cyclist, runner, and outdoors person, showed what could be done with bike lanes, bike routes, and sharrows, which became a model to other Roanoke Valley localities. Key early regional support from Roanoke County was in part due to planning administrator David Holladay who recognized the benefit to the County of the City receiving the Bicycle Friendly Community designation. Liz Belcher has led the Greenway Commission, a remarkable example of regional collaboration, since its inception. Jim Lee, long-time bicycle advocate and member of many of the committees mentioned, commented, “We would still be in the dark ages without the human and financial resources committed by the Regional Commission. As a region, we may never agree on the color, size, or font of a sign but we have found common ground working with the Regional Commission.” 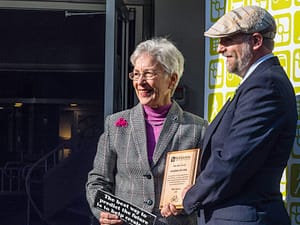 Barbara Duerk served on Bicycle Advisory Committees from 1991 to 2017. RIDE Solutions recognized her contributions with the 2015 Bike Hero Award.

In 2016, waning attendance and staff turnover prompted revisioning and formalization of the committee. Locality staff noted the regional nature and citizen input as valuable characteristics of the committee. For a brief period, the Transportation Technical Committee adopted the group as the Regional Bicycle & Pedestrian Advisory Committee. This was an important step in the revitalization of the committee and establishing structure and legitimacy, but the Technical Committee didn’t have many opportunities to seek the committee’s advice on bike/ped issues. The group’s purpose has not been advisory but has been a forum for local governments, agencies, and citizens to share ideas and information.

In 2020, the members established the Regional Bicycle & Pedestrian Committee under the Roanoke Valley-Alleghany Regional Commission.

The Regional Bicycle & Pedestrian Committee has had a strong role in improving walking and bicycling in the Roanoke Valley. With valuable input from the committee, the City of Roanoke, Roanoke County, Vinton, Salem, and Boutetourt County have implemented bike lanes, sharrows, and bike routes, improving on-road connections with greenways. The committee has collected data and raised awareness of bicycling and walking. The Roanoke Valley-Alleghany Regional Commission and the Roanoke Valley Transportation Planning Organization are proud to facilitate the collaboration that makes our valley a better place to bicycle and walk.