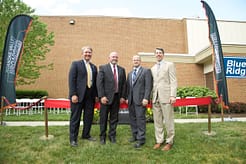 Roanoke Va. – (Sept. 27, 2016) – On September 7, 2016, the City of Roanoke and the Roanoke Valley Broadband Authority received the prestigious Governor’s Technology Award for Cross-Boundary Collaboration at a ceremony during the annual COVITS conference in Richmond, Virginia.

“We are honored to be recognized by the state for the work we’re doing to ensure the Roanoke Valley continues to be a great place to live, work, and start or grow a technology business” said Frank Smith, President and CEO of the Roanoke Valley Broadband Authority. “This affirms that as a community we have found yet another creative way to ensure our region is competitive on the national scene.

Dave Armentrout brings 20 years’ experience as senior executive with fiber telecommunications companies in West Virginia, North Carolina and Illinois to his new role with the RVBA. Previously, Armentrout managed multi-million dollar network implementations with both Google Fiber and Cisco. He is a former board member of the West Virginia Telephone Association. Armentrout also knows this region well. He graduated from Liberty University in Lynchburg, VA.

“With the new carrier-grade connected fiber platform, the RVBA has taken the community’s desire for better connectivity and more competitive economic prospects, and developed a world-class network that offers organizations the speed, capacity, security and cost-points they need to compete on a global scale. I’m excited to join the effort and not surprised that the Governor and his team saw fit to celebrate the initiative so quickly,” new Vice President of Network Engineering and Operations Dave Armentrout said.

“From the start, our municipal fiber project has been a collaborative effort to engage and empower new and existing businesses as well as to attract new high-paying jobs to the communities of Roanoke City, the City of Salem, Roanoke County and Botetourt County,” said Chris Morrill, member of the RVBA Board of Advisors and City Manager of Roanoke, VA. “With over 50 miles of secure, high speed, open-access fiber already operational and more than 80 additional miles of connectivity anticipated by the end of 2018, we look forward to a wide variety of new economic growth opportunities that will benefit the region for years to come.

RVBA fiber representatives are available to help businesses determine which service is right for them. Pricing and service options are publicly available at www.highspeedroanoke.com. To request more information about RVBA fiber service, email sales@highspeedroanoke.net or contact Frank Smith, President and CEO of the RVBA directly at (540) 904-1073.

In 2011, at the urging of several concerned citizens and local business owners, four regional municipalities (The City of Salem, The City of Roanoke, Roanoke County and The County of Botetourt) joined forces to finance a study on fiber-optic Internet access across the region.

When it was discovered that the Roanoke Valley lagged behind the rest of the country with only 8% of the metro population having access to fiber networks (compared to the national average of 24%), a task force was formed to develop specific recommendations that would make the Roanoke Valley a better place to live and work.

In January of 2014, the four municipalities officially took action on these recommendations by forming the Roanoke Valley Broadband Authority to expand the regional broadband infrastructure and make it easier for both new and existing providers to deploy their technology across the Roanoke Valley.

The RVBA was charged with a number of specific initiatives to drive measurable improvements to fiber-optic Internet accessibility, affordability, reliability, and Internet speeds for the purposes of advancing the long-term economic prospects of the region.

The project broke ground in August of 2015 and the RVBA started providing service to its first customers in May of 2016.
###